The small lounge spaces located throughout the campus of Connecticut Children’s in Hartford, provide a place for patients to step away – even just for a few minutes – from treatment and relax with friends and family.

“We go to great lengths to make the hospital a comfortable place for healing,” said Michael Isakoff, MD, medical director of Center for Cancer and Blood Disorders at Connecticut Children’s. “Being a sick child or having a sick child is stressful enough. When we can give our patients and their families spaces that don’t look and feel like a hospital, it can help reduce some of the anxiety and contribute to a better overall experience.”

Renovations are expected to be completed in the spring.

“We’re so appreciative of Bob’s help in furnishing spaces for oncology patients and their families,” added Dr. Isakoff.

Bob’s Discount Furniture has been a supporter of Connecticut Children’s since its doors were first opened in 1996. Connecticut Children’s is the only hospital in the Nutmeg state that is exclusively dedicated to the care of children. The not-for-profit hospital has a medical staff of over 1,000. These dedicated professionals provide family-centered and compassionate healthcare in more than 30 pediatric specialties and subspecialties to children across the state – including a member of Bob Kaufman’s family.

Kaufman’s nephew was treated at Connecticut Children’s for leukemia over 15 years ago.

“It was a tough road for the entire family. My family basically lived here for the better part of 16 months,” said Kaufman. “It really was an experience that has continued, that’s why we continue to support [Connecticut Children’s].”

In addition to announcing a partnership with Connecticut Children’s to renovate lounge area for cancer patients, Bob’s Discount Furniture presented a check to Liz Scott from Alex’s Lemonade Stand Foundation for $85,000. The donation is a combination of all money received in each of Bob’s 104 Cafés across the country during the third quarter of 2018. After tallying all the donations, Bob’s then matches the amount dollar-for-dollar.

Liz Scott is the mother of Alexandra “Alex” Scott, who founded Alex’s Lemonade Stand Foundation. Alex was born in Manchester, Conn. and was diagnosed with a neuroblastoma just two days before her first birthday.

Alex was initially treated at Connecticut Children’s before the family moved to Philadelphia.

“Being back here is obviously very emotional for me,” said Scott. 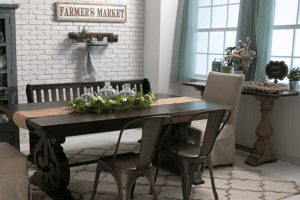 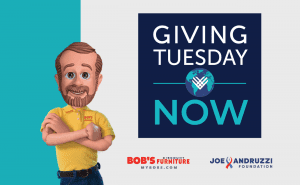